Do you know what time is really about, he asked me. I looked in the face of the old one, confused and without a truth. He said, it's about we most abuse! He than watched my face closely and I saw the sun going down mirrored in his eyes. He laughed without being happy and said: I see, you know nothing. I stand his earnest look, my blood was rushing. It was long ago, as people did not see any real anger in this world. It were the times, those Halls were built. Halls of time, they are called. I nodded, still not understanding what he wanted to tell, I heard about so many things and lessons are everywhere. He said, Time is about the space and about hell. Than he was silent for some hours, I couldn't stand that question anymore, Those halls? Are they hiding certain powers? He nodded slowly: You begin to understand. Those Halls are guarding all we have and had: Time is precious and worthy to defend. I really wasn't sure , our walk was making me weak, I still thought about it, tried to understand, He said time is what we seek. After days of walking without anymore words, He pointed to the far away looming walls in the desert. He said, now it was time, now I had to chose, If I wanted to be a tiger or a goose. There the Halls of Time were painted against the horizon, We wandered for two days, as the walls became manifest, And my fear wasn't gone. My master patted my shoulder and than pushed me in the direction of the halls, As I came closer, I saw the beetles on the walls. "They are eating the forgotten times." I nodded. As a thing was ringing, he said: "That's the doom bell, that chimes." The Halls of Time awaited me with this cool darkness, As I entered the structure and tried to find my way, As I heard those voices, who had nothing to say: I felt lost, I must confess. This was the lesson of life I started to learn, Here was the most value of our world to earn. The Halls of Time give you power over yourself, The Halls of Time, contain more knowledge than an ancient bookshelf. In time we see what we became, As I wandered across the halls, I saw the worlds shame, I saw, my brother dying and crying, I saw, my wishes of nonsense shining... Than as I stumbled over the skulls on the floor, As I opened the final door, I became the soul of time, You can hear the doom bells chime, The Halls of Time are guarding our life, And all begins to revive... 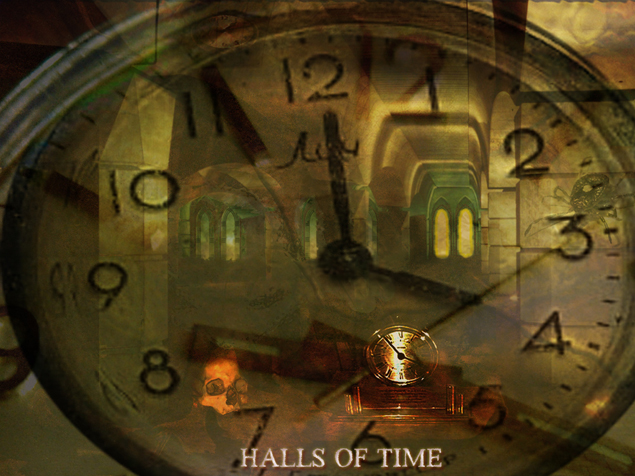 Wallpaper can be found at:
http://www.deviantart.com/deviation/1900378/